The Beekeeper of Beeston

Posted on June 26, 2014 by nottinghamhiddenhistoryteam

The Beekeeper sitting contemplatively on his bench at the centre of Beeston’s shopping hub, he certainly looks content. The Beekeeper or ‘George’ as he is familiarly known by locals, has became part of the town’s identity. The sculpture was designed by artist Sioban Coppinger in 1987.

The sculpture was erected after the local council decided to redesign Beeston in the 1960s and 1970s. Before the town was redeveloped, a lot of older buildings such as the Tudor Style Boots and the old town hall were demolished to make way for the then new shopping precinct and many new buildings.  Beeston was becoming a brave new world of concrete and glass, like many other cities and towns throughout England.

It is quite ironic now how Beeston is going through another redevelopment changing the face of the town for ever. When the £300,000 improvement scheme for the pedestrianisation of Beeston High Road was announced just like the trams today it caused a lot of protest from local residents. Pat Ashworth writing for local paper the ‘Nottingham Topic’ (May 1998) about her article on ‘Booming Beeston’, looked back at locals reactions to the pedestrianisation:

Whatever the controversy at the time, if it wasn’t for the pedestrianisation of High Road we certainly would not have George the Beekeepr in the town. The sculpture consists in the main of two L-shaped concrete hedges. In the angle of one hedge the concrete figure of an elderly man sits on a bench, complete with beekeeper’s hat and gloves lying beside him. He wears an overcoat and Wellington boots and in his right hand is a smoking a pipe. In his left hand he holds a block of honeycomb. At the angle of the other hedge is a concrete carved tree-stump on top of which is set a conical beehive. The hive, and many other parts of the sculpture, are covered by small bronze bees securely stuck to the surfaces. A few of the bronze bees have been knocked off as souvenirs, but all in all the Beekeeper is in good condition. 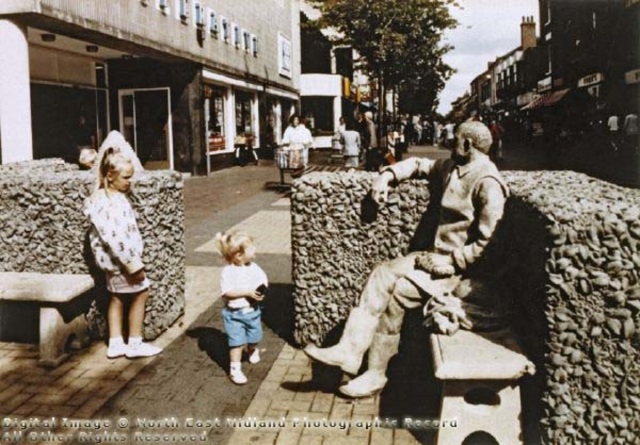 ‘The Beekeeper’ not long after he was erected in Beeston, c late 1980s- Photo Credit: Picture the Past.

The idea of the sculpture was to bring a bit of the countryside into the town. Sioban Coppinger explains about the sculpture further “THE BEESTON SEAT was designed as a quiet meditative resting place at the centre of a busy shopping street. The sculpture itself  was modelled on Steven Hodges, a friend who has that timeless ability to exude calm when all else are succumbing to stress. Maybe his years spent on the sea have instilled a sense of proportion in him or maybe he just looks the part? A stack of mail from Beeston residents confirms that the BEESTON BEEKEEPER has been absorbed into the life of the community”.

He certainly has been absorbed into the life of the town and long may he continue to do so. 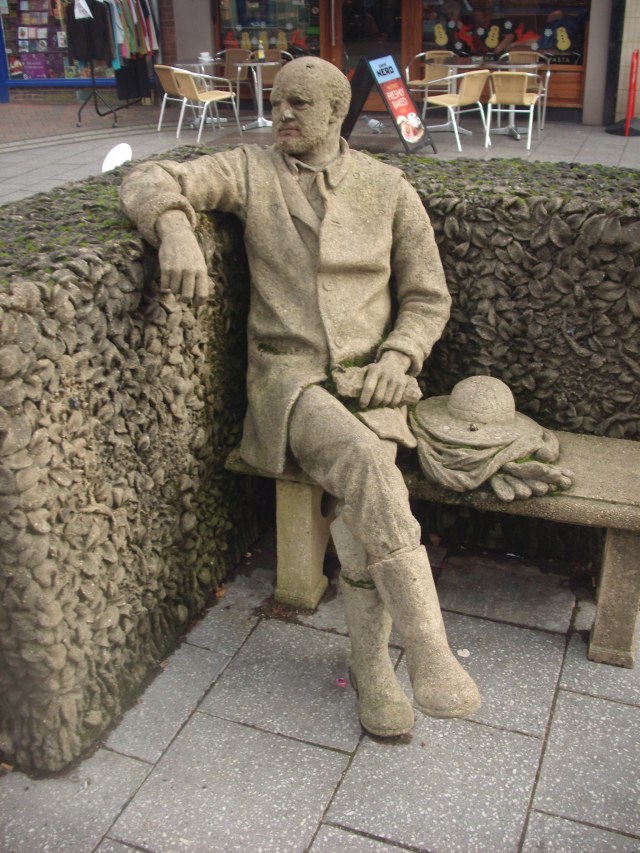 Originally formed in 1965 to try to save or at least record before destruction the cave sites continually discovered during the major redevelopment of the City that took place in Nottingham in the 1960′s. Almost every day new sites were unearthed and destroyed before anyone was notified; last thing they wanted was someone telling them to stop what they were doing; TIME is MONEY. The word HIDDEN in the Team’s title is because a lot of what was being invisibly lost in the redevelopment was our early history in the caves, they are under most, if now all, of Nottingham. In the 80’s and 90’s the Team conducted with the help of Dr Robert Morrell and Syd Henley, research and work on Nottingham’s history, folklore and local archaeology. The Team published quarterly magazines on their findings. The Team lapsed for a few years after the death of Paul Nix who was the team leader for thirty plus years. The Team has reformed and is now back working on Nottingham local history. On this blog you will find a series of history, folklore and archaeological related articles and information. Most of the material published will be specifically related to Nottingham/shire local history.
View all posts by nottinghamhiddenhistoryteam →
This entry was posted in Beeston, Nottinghamshire Suburbs. Bookmark the permalink.