Posted on July 30, 2013 by nottinghamhiddenhistoryteam

On 2nd October 1603 Huntingdon Beaumont started construction on his wooden waggonway and by 1st October 1604 it was complete.

“Huntingdon Beaumont hath used new and extronaiary inventions and practices for the spedy and conveyance of the said coales, and  especially by breaking the soyle for laying of rayles to carry the same uppon with great ease and expedition the length of two myles or thereboutes, and by drawinge of certain carrylagges laden with coales uppon the same rayles whereby a hundred and twenty rooke of coales uppon in a weeke att the least being worth twenty poundes are conveyned away uttered and solde more than otherwise there could bee by the ordinaric and customaric course of the gettinge and carryinge away of the said coales”.

In the year Sixteen Hundred Elizabeth the First was Queen and England was an entirely different place to what it is today. Most people lived in timber framed houses with infill of wattle and daub or wood, only shutters on the windows and thatched straw as the roofing material. No sanitation, electricity, gas, or running water. No heating, cooking and most lighting was done with an open fire, kept burning with hand chopped fire wood.

Creature comforts were sparse, seats were made of wood without any upholstery, you relied on your many layers of clothing for that. Life was hard rising with the sun and after twelve to fifteen hours work retiring to bed. You may have a working horse but you walk everywhere, only the rich could afford a horse to ride on. Getting around was difficult as roads were unmade and impassable in winter.

Huntingdon Beaumont, son of a mine owner in Coleorton, Leicester, arrived in Nottingham in the year 1600, possibly at the behest of Percival Willoughby of Wollaton Hall. In October 1601, April 1602, July 1602 and 2nd October 1603 Huntingdon signed leases with Percival to mine coal in Wollaton (Crow Wood and Bretlawne) and in Strelley. On 2nd October 1603 he started work on his two miles of wooden rails from Strelley to Wollaton.

Example of a Wooden Track
Credit: The Paul Nix Collection

Huntingdon Beaumont had been involved in mining from an early age and subsequenly must had access to his own Father’s extensive library of books on the subject. Percival Willoughby of Wollaton Hall had a copy of ‘De Re Metallica’ by Georguis Agricola (1556) in his library and Huntingdon may have had access to it. This book was well ahead of its time and used many illustrations of mining techniques all based on good field work observations. 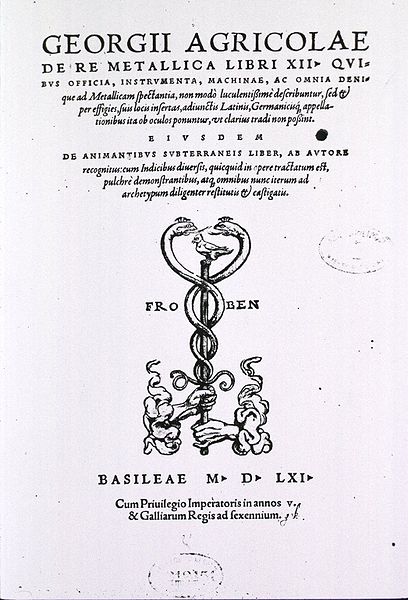 The illustration below from ‘De Re Metallica’  may have been the inspiration for Huntingdon’s wooden waggonway; wooden rollers running on planks and a guide peg running in the central grove to keep the tub central. These tubs were small and narrow to fit the width of the mine and mark pushing when full of coal possible by one man. Huntingdon was not limited by these size and manpower limitations, he built his waggons broader and used horsepower. 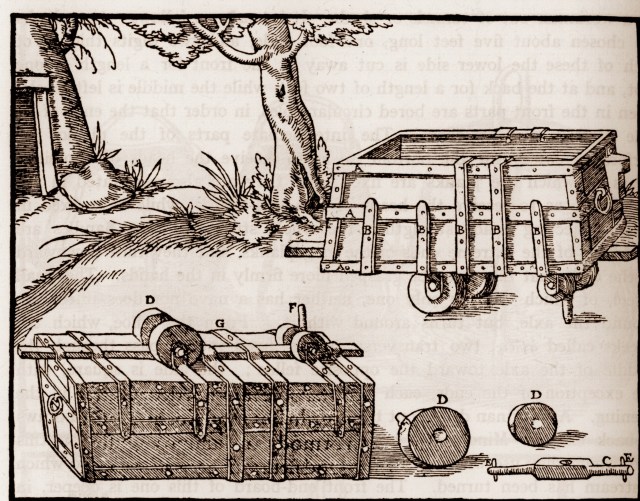 A Tub from ‘De Re Metallica’ (1556)
Credit: The Paul Nix Collection

Huntingdon chose the start of his waggonway route to coincide with the point where the Parishes of Strelley, Bilborough and Wollaton join together; it actually sits astride two of the boundarys (Strelley and Bilborough) the rails cross the boundary into Wollaton. From this point it is a gentle downhill route, making it easier for the horses when loaded. The other end of the route was at a coal collection point for Tumbills and Waynes on the Wollaton Road.

View of the Route, Looking up from Strelley
Credit: The Paul Nix Collection

Th Start point was also well chosen as it had many bell pits within an 100 yard ark, some are still visible as depression within a ring of tress. This point was a natural level place so that loading the waggons would be easier, no need to secure them from moving. Trees cut to clear the route were used for the constrcution but other timber may have come from Short Wood. The route can still be followed today, with a few minor detours.

Originally formed in 1965 to try to save or at least record before destruction the cave sites continually discovered during the major redevelopment of the City that took place in Nottingham in the 1960′s. Almost every day new sites were unearthed and destroyed before anyone was notified; last thing they wanted was someone telling them to stop what they were doing; TIME is MONEY. The word HIDDEN in the Team’s title is because a lot of what was being invisibly lost in the redevelopment was our early history in the caves, they are under most, if now all, of Nottingham. In the 80’s and 90’s the Team conducted with the help of Dr Robert Morrell and Syd Henley, research and work on Nottingham’s history, folklore and local archaeology. The Team published quarterly magazines on their findings. The Team lapsed for a few years after the death of Paul Nix who was the team leader for thirty plus years. The Team has reformed and is now back working on Nottingham local history. On this blog you will find a series of history, folklore and archaeological related articles and information. Most of the material published will be specifically related to Nottingham/shire local history.
View all posts by nottinghamhiddenhistoryteam →
This entry was posted in Nottinghamshire Industrial History, Wollaton. Bookmark the permalink.